I'm inspired this week by an article I read recently from America. It concerned the hard time an elderly customer was given at a supermarket by a cashier in her 20s. The elderly person hadn't brought her own bags and so was told by the cashier she was contributing to damaging the environment. The cashier added that this is the problem today, because past generations didn't care enough, didn't understand the green issue.

Well, I thought I'd write my own take on an appropriate response.

When I was a kid, every morning a glass milk bottle would be placed on the table for breakfast. Once empty it was returned, sterilised and reused. Repeatedly. Real recycling. But of course, we didn't understand the green issue back then.

My school was just over one mile away from home, and every morning I met my friends on the way there while I walked to school, along with all the other pupils. Our parents wouldn't dream of driving us to school in their fossil-fuel-consuming vehicle. But  they didn't understand the green issue back then.

When I got home from school my father would be on the back lawn of the garden, pushing and pulling the lawnmower to cut the grass. Good exercise and less polluting than the latest petrol or electric powered mower. But he didn't understand the green issue back then.

In the evening we might watch TV as a family. One TV. In one room, not one in every room! And a screen the size of a cornflake packet, not Belgium!

In the evening I would be outside playing with friends, getting fresh air and keeping fit so that in later life I wouldn't have to pound a treadmill, driven by electricity, in a brightly lit gym, to work off the excess from being sat in front of a game machine, using electricity while munching fast food.

Our neighbours, who had recently had a baby, would be outside bringing in the now dry nappies after they had been laundered, instead of filling a landfill site with disposable ones.

Our leftovers from meal times were put into the fridge and another dish would be created from this the following day, not emptied into the bin.

There was one telephone in the house, the original one from when the phone company that had installed the line several years before. If it broke it was repaired, not replaced by the latest version after just a few months because of a new colour or one extra button that did something you never needed to do before.

But of course, back then, we never understood the green issue.
Posted by Graham Kitchener at 16:41 1 comment:

It's been a busy old time recently, so apologies for my absence of posting for over a week.

Pauline and I have been continuing with our talk tour for Sleepless 'til Seattle, last Friday appearing at the newly refurbished Birks Cinema in Aberfeldy. It was first opened in July of 1939 but sadly only remained in operation until 1980. At that point, until 2004, like many old cinemas, it became a tacky amusement arcade. Now, thanks to generous donations, fund raising and grants it has opened once again with a 100-seat, 3D digital cinema.

This talk was quite different from all of the other venues we will be appearing at, mainly because of course it is a cinema and not an actual theatre. We were also not the only participants that night. Several amateur films were shown after us as part of the Highland Perthshire Cycling festival week.

It was a late finish when we left the venue, and it was midnight before we were pitching our tent on the outskirts of Blair Atholl, some 15 miles away. We had decided to make the most of being in the area that weekend by taking our mountain bikes with us for an off road run through the hills.

The following morning was bright as we pedalled out of Blair Atholl west, past the small settlements of Bruar and Calvine, before reaching our turn off for the start of the Gaick Pass that would take us 20 miles through the hills to Kingussie. The route is an ancient drove trail, a remote u-shaped pass through the Drumochter Hills.

It was more like winter instead of late spring, with a bitingly cold wind and frequent squally showers pushing through. Half way we were off the bikes and pushing for a mile and a half alongside a small loch callled Loch an Dun, which forms the pass, where in a previous year we had see whooper swans. This time there were no swans but there was a pair of oyster catchers.

We had anticipated three river crossings but in the end we only had to negotiate one, which was difficult enough pushing a loaded bicycle through knee-deep fast-flowing waters.

The run out at the north end was spectacular and fast. We popped out of the hills at the ruins of Ruthven Barracks at Kingussie, then turned west, three miles down the road to camp near the wildcat trail on the outskirts of Newtonmore.

Our second day, though dry, was hampered by a constant 20mph headwind. We had hoped that it would become a tail wind as we followed the curve of the Drumochter Pass back toward Blair Atholl. However in reality the wind was being channeled round the curve of the pass and remained in our faces for the entire 33 miles back.

It was great to be back out in the Scottish hills again, with Pauline, working hard on the mountain bikes, battling the elements and camping out.

This is the second time I have been through the Gaick Pass, once on foot with my friends Andrew and Pauline, and now by bike with just Pauline. Both times it has been entirely different, with the walking trip in a near white-out blizzard.

It is a fabulous walk or bike run, and I don't think it will be the last time I enjoy it's beauty.
Posted by Graham Kitchener at 23:29 No comments:

Just outside the small picturesque village of Dunkeld lies a small hill, just a little over 1500 feet, called Deuchary Hill. There's nothing hard about this walk, both in terms of physical effort and distance, but it is full of rewards.

I first walked up this hill last year with my friend Andrew, and last weekend we returned with four other friends on a glorious day.

Part of the joy of hillwalking for me is taking the train whenever possible to the starting point. Sometimes there just isn't that choice, such as for the mountains of Glencoe, but for Deuchary Hill it's a short travel time from Edinburgh to the outskirts of the village of Dunkeld.

The estimated time for a circular route of Deuchary is six hours, though in the end we took slightly longer. Even the reward at the end of food and a drink at the Taybank bar, overlooking one of the great salmon rivers in Scotland, the River Tay, couldn't tempt us to hurry.

At Mill Dam we were supposed to take a left on the advice of my friend Pauline, but we decided to continue on to the small body of water, Loch Ordie. We stopped briefly just after Mill Dam for a spot of lunch, soaking in the late spring sunshine and watching the birds flitting around gathering nesting material.

Doubling back slightly after Loch Ordie we found the path up to the summit, and 20 minutes later we were admiring the views from the rocky top. The unmistakable pointed peak of Schiehallion was visible nearby, still covered in late snow. As Dave passed around his hip flask of brandy we congratulated each other on a job well done.  For a while longer we sat silently, not from exhaustion but from quiet contemplation as we watched the few clouds there were drift slowly by.

We picked a direct, short but steep route off the hill and wandered back to Dunkeld for our evening meal, satisfied in our little expedition with old friends up Deuchary Hill. 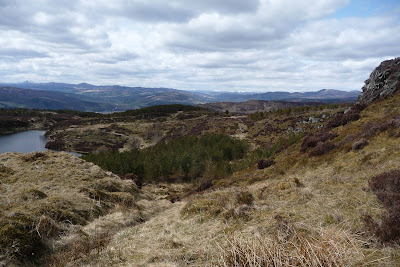 Posted by Graham Kitchener at 22:32 No comments:

An adventure talk all about the 4,000 mile cycle across North America